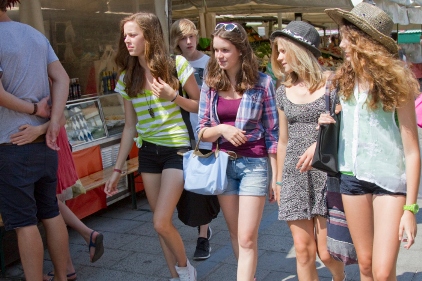 The age puberty starts can be a factor in developing a range of diseases from cancer to diabetes, suggests a study.
Starting early or late could alter the risk of nearly 48 separate conditions, including the age of menopause.
The analysis of half a million people, published in Scientific Reports, showed early puberty increased the odds of type 2 diabetes by 50%.

The researchers said it was “astonishing” that puberty was having an impact on health in mid-life.
The team at the MRC Epidemiology Unit at the University of Cambridge used data from a huge study of the health of British people – the UK Biobank.

The project recorded the age of girls’ first period, but a measure of the start of puberty is harder to define in men, so they were asked if they were earlier or later compared to the rest of their peer group.

In girls an early puberty was defined as starting between eight and 11, while a late puberty started between 15 and 19. A normal puberty was between nine and 14 in boys.

Hormones have been implicated in some of the conditions, such as cancer, although the researchers admit that they have “very little idea” what might contribute to diseases such as asthma.

Dr Felix Day told the BBC News website: “From a biological point of view, it’s actually quite fascinating that something that happens when you’re a teenager can have an effect on diseases that you wouldn’t encounter until middle age. I find that quite astonishing.”

Dr Day said this was “something people involved in public health should be aware of”.
“The move towards earlier puberty is an added risk factor in terms of development of particularly metabolic diseases.”

However, as the study showed an increased risk for both early and late puberty, there could be a decrease in the incidence of some conditions.

He added that because someone had an early or late puberty did not mean they would develop these conditions – it just altered the odds.

Dr John Perry, from the MRC Epidemiology Unit, added: “We are continuing to work to understand how puberty timing impacts later health and how this information may be used alongside efforts to support healthy lifestyle changes and prevent disease.

“It is important to note that the increase in disease risk attributable to puberty timing is still relatively modest and represents one of many factors that contribute to the overall risk of developing disease.”