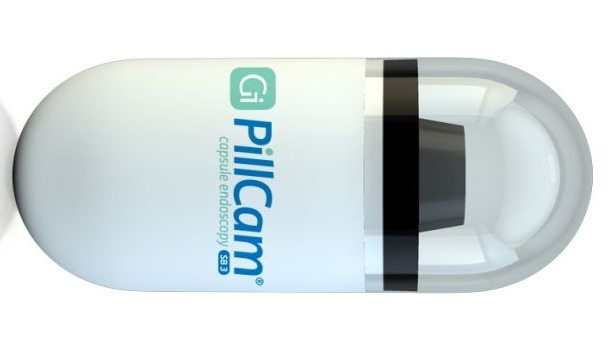 PillCam SB is the most widely used, patient-friendly tool for visualization of the entire small bowel and is the standard of care for detecting small bowel abnormalities. It is the only capsule endoscope indicated for use in patients two years of age and older.

The PillCam SB video capsule measures 11mm x 26mm and weighs less than four grams. The video capsule contains an imaging device and light source at both ends of the capsule and transmits images at a rate of two images per second, generating more than 50,000 pictures during the eight-hour procedure.
PillCam SB was initially cleared by the U.S. Food and Drug Administration in 2001. Now in its second-generation, PillCam SB 2 captures the broadest mucosal area per image with the widest field-of-view. In addition, advanced optics and Automatic Light Control provide optimal image quality and illumination.

How the Procedure Works
Patients typically begin fasting at midnight the day before the procedure. The following morning the patient will arrive at the doctor’s office to be prepped for the procedure. The nurse will fit the patient with a comfortable belt (SensorBelt) containing sensors, with easy-fasten straps for quick adjustments and removal. After being fitted with the belt, the patient will be given a glass of water to help swallow the vitamin-sized pill. After the patient has successfully swallowed the PillCam video capsule, they will be able to resume daily activities. After eight hours, the patient will return to the physician’s office with the SensorBelt and DataRecorder. The PillCam video capsule passes naturally with a bowel movement, usually within 24 hours.

The physician will then download images from the DataRecorder for review.