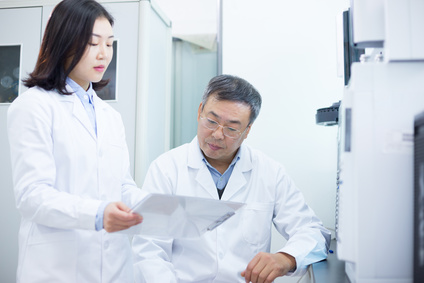 Top scientists at Roche Holding AG and AstraZeneca Plc are sizing up potential allies in the fight against cancer: the trillions of bacteria that live in the human body.

“Five years ago, if you had asked me about bacteria in your gut playing an important role in your systemic immune response, I probably would have laughed it off,” Daniel Chen, head of cancer immunotherapy research at Roche’s Genentech division, said in a phone interview. “Most of us immunologists now believe that there really is an important interaction there.”

Two recent studies published in the journal Science have intrigued Chen and others who are developing medicines called immunotherapies that stimulate the body’s ability to fight tumors.

In November, University of Chicago researchers wrote that giving mice Bifidobacterium, which normally resides in the gastrointestinal tract, was as effective as an immunotherapy in controlling the growth of skin cancer. Combining the two practically eliminated tumor growth. In the second study, scientists in France found that some bacterial species activated a response to immunotherapy, which didn’t occur without the microbes.

Human Microbiome
That’s increased drugmakers’ interest in the human microbiome — the universe of roughly 100 trillion good and bad bacteria, fungi and viruses that live on and inside the body. Roche is already undertaking basic research in the field and plans to investigate the microbiome’s potential for cancer treatment, Chen said.

“Certainly, we are already scanning the space for interesting opportunities as the science continues to emerge,” he said. “We are very interested in testing these in a controlled setting.”

Some experienced investors are skeptical and see the possibility of an approved product for cancer to be at least five years away.

“To therapeutically influence the microbiome long-term in humans is a big hurdle,” said Sander van Deventer, managing partner at venture-capital firm Forbion Capital Partners. “The microbiome is very stubborn. Everything we’ve done so far has only had a temporary effect.”

Nestle’s Investment
Earlier in his career, van Deventer chaired the department of gastroenterology and hepatology at the Academic Medical Center in Amsterdam, the first clinic in the world to perform fecal transplants to fight hospital infection Clostridium difficile with good bacteria. Forbion hasn’t yet invested in any microbiome biotechs, “but we’re looking at all of them all the time,” he said.

Efforts are under way to turn bacteria into regulated pharmaceutical products to treat illnesses of the gut, where the microbes reside.

Nestle SA last January invested $65 million in ambridge, Massachusetts-based Seres Therapeutics Inc., which is developing a treatment for Clostridium difficile, which affects the digestive system. That follows early efforts to harness the microbiome’s benefits, which spawned probiotic foods and supplements as well as transplants of healthy bacteria.

Treatment Potential
“That’s the sense we get based on how we’re being approached by new pharma groups and how serious they seem to be about wanting to enter the field,” Olle said in a phone interview. Vedanta last year announced a license agreement with Johnson & Johnson on its experimental microbiome drug for inflammatory bowel disease.

Another startup, 4D Pharma Plc, in November said it had discovered a bacterium that produces a response comparable to that of an immunotherapy in animal tests for breast and lung cancers. The London-listed company plans to start trials in patients by the end of this year. To support research in autoimmune and neurological diseases, in addition to cancer, the company has raised over 100 million pounds ($140 million) from investors over the last two years, CEO Duncan Peyton said in a phone interview.

French biotech Enterome is taking a different approach: developing treatments based on bacterial secretions. Enterome plans to close a private financing round of about 15 million euros this month, according to CEO Pierre Belichard. More news may be on the way.

‘Active Discussions’
“We are in active discussions with the usual suspects in the immunotherapy space,” Belichard said in an interview in London.
Those active in the field include a wide range of pharma companies including AstraZeneca, Roche, Bristol-Myers Squibb Co., and Merck & Co.
“Personally, I think it’s a fascinating area,” Susan Galbraith, head of oncology research at AstraZeneca, said in an interview in London.
Studies have shown that immunotherapies have varying degrees of success even in genetically identical mice, and the Science study from Chicago suggests that the diversity of the microbiome may help explain that variability, Galbraith said. AstraZeneca isn’t conducting its own research in the area and would prefer to wait to see evidence in human trials before getting involved, she said.
The sheer number of bacteria, some of which could actually switch off an immune response, and the question of how much bacteria is needed, make it a complex area of research, Roche’s Chen said. It’s possible that the same bacteria could induce both harmful and helpful responses, depending on the patient, he said.
Still, “it’s one of the most interesting developments we’ve seen in science over the last several years,” he said.