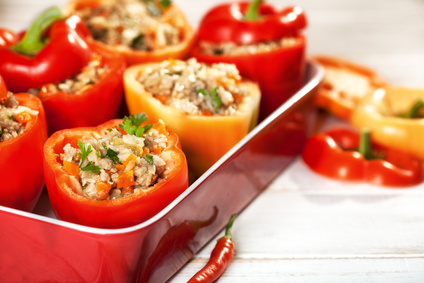 The low FODMAP diet is often used in those with irritable bowel syndrome (IBS). The diet could be possibly used in those with similar symptoms arising from other digestive disorders such as inflammatory bowel disease. This diet will also limit fiber as some high fiber foods are also high in FODMAPs (Fiber is a component of complex carbohydrates that the body cannot digest, found in plant based foods such as beans, fruits, vegetables, whole grains, etc)

METHOD
1. Determine how many peppers will fit in your intended cooking pot (must have a lid); e.g. a large pot with a wide diameter may fit 5-6 peppers. Wash the bell peppers thoroughly.

2. Fill approximately half of the pot with water, though ensure that the water level does not submerge the peppers. The ideal water level is a little below the tops of the peppers.

4. Cut the tops off by standing pepper stem side up on a surface and cutting circularly around the stem.

5. When completely cut, lift off the tops and remove the seeds from the inside of each pepper. Place the cleaned and cut in the pot with the salt-pepper brine and leave them in it for at least 15 minutes while you prepare the stuffing.

6. In a large bowl add all the stuffing ingredients and mix well by hand. Do not blend in a food processer, just ensure that all ingredients are distributed evenly throughout the mixture as this will make up the stuffing. [Suggestion: after mixing, treat yourself a little 5 or so minute break while the mixture sits and the flavours combine.] The peppers are ready to be filled when the stuffing has been prepared and after at least 15 minutes of soaking in the salt-pepper brine.

7. Drain any brine on the inside of the peppers back into the pot and fill the peppers with stuffing. Important: after filling, score peppers around the sides multiple times with the tip of a knife to ensure thorough cooking. Place the stuffed peppers into the pot and transfer the pot to the stovetop.

8. Place the lid on the pot and bring the contents to a boil under high heat. Lower the heat slightly after the contents have reached a boil; they should still be at a boil, but not a violent boil to the point where the peppers fall over, more like a merry boil, for 40-45 minutes.

9. By this time, the rice and meat will cook and your peppers will be ready to enjoy! Transfer peppers carefully to plates or bowls if you’d like to serve them along with some of the brine… anoush ella, or let it be sweet, bon appétit!

Note: if making this for friends and family who can tolerate onion and garlic then you may want to add 1 chopped brown onion in the mix and one clove of garlic in each capsicum that is to be given to your friends. You can then cook the low FODMAP pepper in a separate pot or alternatively add a tooth pick in the top of the low FODMAP one to be able to pick the difference. Personally when I made mine my pot was too big so it all fell over so for safety the best option is boiling the peppers separately.