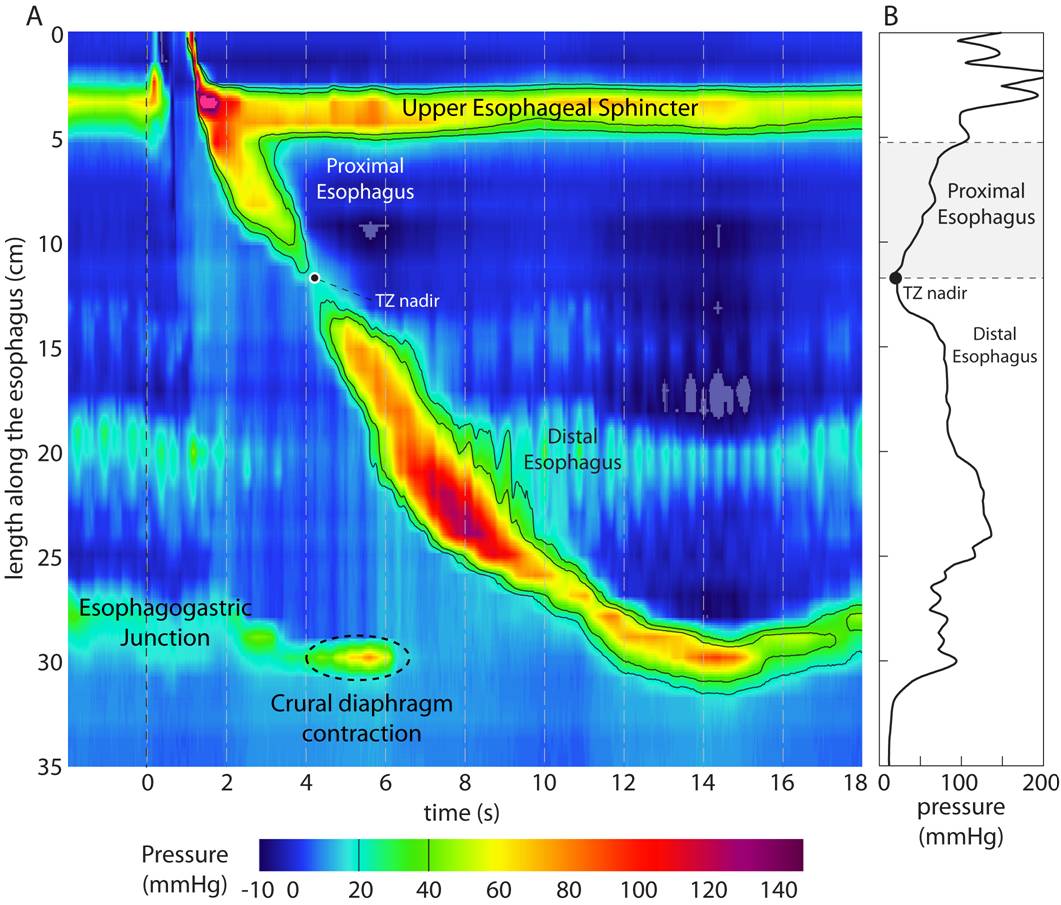 Esophageal manometry (also called esophageal motility) is a procedure to measure the strength and function of your esophagus and provides information about how the muscles in your throat and esophagus work as food and liquids pass from the mouth to the stomach. Esophageal manometry is performed for the following reasons:

WHAT Can Be Learned from THE ESOPHAGEAL MANOMETRY TEST?

• The procedure takes about 45 minutes from start to finish.
• The nurse will verify that you had nothing by mouth in the last 6 hours prior to the test.

• Your nostril and throat is numbed with a topical anesthetic while you are sitting upright.
• A thin flexible tube about one-eighth inch in diameter (approximately the size of pencil) is then passed through the nostril, down the back of the throat into the esophagus and the stomach, while the patient swallows water. The tube has holes in it that sense pressure along the esophagus. It will be positioned in different areas of your esophagus.
• With the tube inside the esophagus, you will lie down on your left side.
The nurse will give you small sips of water during the test to record the progression of the swallow.
• The contractions of the esophageal muscle will be measured at rest and during swallows.
• Pressure recordings are made and the tubing is slowly withdrawn.
• The results of the manometry test are displayed as a graph with a wave pattern that can be interpreted to determine if the esophagus is functioning normally.

Since your throat was numbed, you have to wait one hour after completion of the test before you can eat or drink anything. This is to protect you from burning your throat or choking. You may drive yourself home before and after the test since no sedation is involved.

When the tube goes through your nose or mouth into your esophagus, you may feel like coughing or gagging. The test may be easier if you try to take slow, deep breaths. You may not like the taste of the lubricant on the tube.

If you have a test that involves adding acid to your stomach, you may have heartburn pain and other symptoms of acid reflux.

After the test is over, your throat may feel sore. However, this should improve within a day or so.

Esophagus tests measure muscle pressure and movement, coordination, and strength of the tube that connects the throat to the stomach (esophagus). It also tests how well the ring of muscles (sphincters) at the top and bottom of the esophagus work.

Side-effects of the procedure

The procedure is not really painful because the nostril and throat is anesthetized, but it may feel slightly uncomfortable. Once the tube is in place, patients talk and breathe normally.

The side effects of esophageal manometry are minor and include mild sore throat, rare nose bleed and, very uncommon sinus problems due to irritation and blockage of the ducts leading from the sinuses and into the nose.

You may experience some temporary discomfort in your throat. Over the counter throat lozenges may give some relief. Occasionally, during insertion, the tube may enter the larynx (voice box) and cause choking. When this happens, the problem usually is recognized immediately, and the tube is rapidly removed.

Special care is used when passing the tube in patients who are unable to easily swallow on command because without a swallow to relax the upper esophageal sphincter the tube often doesn’t enter the esophagus but instead enters the larynx.