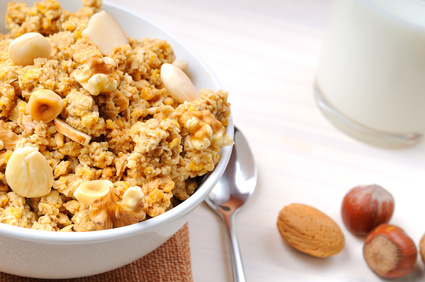 The persistent myth that dietary fat causes obesity and promotes heart disease has undoubtedly ruined the health of millions of people. It’s difficult to know just how many people have succumbed to chronic poor health from following conventional low-fat, high-carb recommendations, but I’m sure the number is significant.

In the featured documentary, Cereal Killers, 41-year-old Donal O’Neill turns the American food pyramid upside-down—eliminating sugars and grains, and dramatically boosting his fat intake. In so doing, he improves his health to the point of reducing his hereditary risk factors for heart disease to nil.

Watching people’s reactions to his diet brings home just how brainwashed we’ve all become when it comes to dietary fat. Most fear it. Yet they will consume sugar in amounts that virtually guarantee they’ll suffer all the devastating health consequences they’re trying to prevent by avoiding fat, and then some!

Fat versus Carbs—What Really Makes You Pack on the Pounds?

The fact is, you’ve been thoroughly misled when it comes to conventional dietary advice. Most dietary guidelines have been massively distorted, manipulated, and influenced by the very industries responsible for the obesity epidemic in the first place—the sugar and processed food industries.

Shunning the evidence, many doctors, nutritionists, and government health officials will still tell you to keep your saturated fat below 10 percent, while keeping the bulk of your diet, about 60 percent, as carbs.1 This is madness, as it’s the converse of a diet that will lead to optimal health.

A recent Time Magazine2 article highlighted a report by the Environmental Working Group (EWG), which showed that many breakfast cereals contain more than 50 percent sugar by weight! Cereals marketed specifically to children are among the worst offenders. Kellogg’s Honey Smacks and Mom’s Best Cereals Honey-Ful Wheat topped the list with 56 percent sugar by weight. If you’re looking for alternatives for your family you could try Snackimals from Barbara’s. Snackimals is not on the EWG’s list because it is a newer product. All of their flavors have only 7 grams of sugar per serving.

Even diabetes organizations promote carbohydrates as a major component of a healthy diet—even though grains break down to sugar in your body, and sugar promotes insulin resistance, which is the root cause of type 2 diabetes in the first place.

As noted in the film: “If we could get all diabetics to eat a high-fat, high-protein, low-carbohydrate diet, we would cut the insulin requirement so dramatically that it’s been estimated that six pharmaceutical companies would go out of business tomorrow.” Contrary to popular belief, you do not get fat from eating fat. You get fat from eating too much sugar and grains.

In the film, O’Neill switches over to a diet where 70 percent of his calories come from healthy fat—most of it in the form of macadamia nuts (my personal favorite)—and the remaining 30 percent of his caloric intake is divvied up between protein and fibrous fruits and vegetables. Over the course of 28 days, O’Neill:

• Loses weight and body fat
• Increases his lean muscle mass
• Feels more energetic and improves his athletic performance
• Increases his resting metabolic rate
• Improves his blood pressure, cholesterol, and other measurements to the point that he no longer has any risk factors for heart disease, which he’s genetically predisposed for

Of particular importance here is that O’Neill’s total cholesterol and LDL levels went up, which initially caused significant concern. However, once they tested the LDL particle numbers, the results showed that his LDL particles were the largest species known, and he had virtually no small LDL particles at all.

This is phenomenal, as it’s the small, dense LDL particles that cause inflammation. Large particles do not. Also, the markers for inflammation were virtually nonexistent, showing that he has no inflammation in his body at all. All in all, his one-month long high-fat, no-carb diet experiment proved that:

• Eating fat helps you lose fat
• Eating saturated fat decreases your risk factors for heart disease
• Regardless of your genetic predisposition your diet is, ultimately, the determining factor

I would also add that his results show the benefits of a high-fat, low-carb diet for athletes, many of whom are still convinced that this type of diet will make them heavy and sluggish. On the contrary, O’Neill breaks his own athletic record during his experiment, and refers to his renewed sense of vigor as feeling like a “spring lamb.”

This high and sustained energy is a hallmark of ketogenesis, where your body is burning fat rather than sugar as its primary fuel. When your body burns fat, you don’t experience the energy crashes associated with carbs.

Saturated Fat and Cholesterol Are Both Necessary for Optimal Health

Contrary to popular belief, saturated fats from animal and vegetable sources provide a number of important health benefits, and your body requires them for the proper function of your:

Cholesterol—another wrongly vilified dietary component—also carries out essential functions within your cell membranes, and is critical for proper brain function and production of steroid hormones, including your sex hormones. Vitamin D is also synthesized from a close relative of cholesterol: 7-dehydrocholesterol.

Your body is composed of trillions of cells that need to interact with one another. Cholesterol is one of the molecules that allow for these interactions to take place. For example, cholesterol is the precursor to bile acids, so without sufficient amounts of cholesterol, your digestive system can be adversely affected. It’s also critical for synapse formation in your brain, i.e. the connections between your neurons, which allow you to think, learn new things, and form memories. In fact, there’s reason to believe that low-fat diets and/or cholesterol-lowering drugs may cause or contribute to Alzheimer’s disease.3

Underlying most chronic diseases, including obesity, type 2 diabetes, heart disease, and cancer are inflammation and insulin/leptin resistance. When you eat carbohydrates, your blood sugar, insulin, and leptin will all temporarily rise, and these spikes are very pro-inflammatory. Where you have inflammation, disease and dysfunction follows. An excellent editorial in the journal Open Heart4 reviews the cardiometabolic consequences of replacing saturated fats with carbohydrates, which includes the following:

Avoid refined sugar, processed fructose, and grains. This means avoiding processed foods, as they are chockfull of these ingredients, along with other chemicals that can wreak metabolic havoc
Eat a healthful diet of whole foods, ideally organic, and replace the grain carbs you cut out with:
Moderate amounts of high-quality protein from organic, grass-fed or pastured animals (this is to ensure you’re not getting the antibiotics, genetically engineered organisms, and altered nutritional fat profile associated with factory farmed animals)
High amounts of high-quality healthful fat as you want (saturated and monounsaturated). Many health experts now believe that if you are insulin or leptin resistant, as 85 percent of the US population is, you likely need anywhere from 50 to 85 percent of your daily calories in the form of healthful fats for optimal health. Good sources include coconut and coconut oil, avocados, butter, nuts (particularly macadamia), and animal fats. Avoid all trans fats and processed vegetable oils (such as canola and soy oil). Also take a high-quality source of animal-based omega-3 fat, such as krill oil.
As many vegetables as you can muster. Juicing your vegetables is a good way to boost your vegetable intake
Another “add-on” suggestion is to start intermittent fasting, which will radically improve your ability to burn fat as your primary fuel. This too will help restore optimal insulin and leptin signaling.

What’s the Deal with Protein?

Dr. Rosedale, who was one of my primary mentors on the importance of insulin and leptin, was one of the first professionals to advocate both a low-carb and moderate protein (and therefore high-fat) diet. This was contrary to most low-carb advocates who were, and still are, very accepting of using protein as a replacement for the carbs.

The problem is that, along with grains, most Americans tend to eat far too much protein. While your body certainly has a protein requirement, there’s evidence suggesting that eating more protein than your body needs could end up fueling cancer growth.

Dr. Rosedale advises limiting your protein to one gram of protein per kilogram of lean body mass (or 0.5 grams per pound of lean body weight). For most people, this means cutting protein down to about 35-75 grams per day. Pregnant women and those working out extensively need about 25 percent more. I believe this theory is worthy of consideration. The key though is to add healthy fat to replace the carb and protein calories you’re cutting out of your diet. Again, sources of healthy fat include:

Olives and olive oil Coconuts and coconut oil Butter made from raw grass-fed organic milk
Organic raw nuts, especially macadamia nuts and pecans, which are very high in fat and low in protein Organic pastured egg yolks and pastured meats Avocados
Your Health Is Within Your Control

Groundbreaking research by the likes of Dr. Robert Lustig and Dr. Richard Johnson (author of the books, The Sugar Fix and The Fat Switch) clearly identifies the root cause of obesity, diabetes, heart disease, and numerous other chronic diseases, and it’s not fat. It’s refined sugar—particularly fructose—consumed in excessive amounts. Their research, and that of others, provides us with a clear solution to our current predicament. In short, if you want to normalize your weight and protect your health, you need to address your insulin and leptin resistance, which is the result of eating a diet too high in sugars and grains.

For a comprehensive guide, see my free optimized nutrition plan. Generally speaking though, you’ll want to focus your diet on whole, ideally organic, unprocessed or minimally processed foods. For the best nutrition and health benefits, you’ll also want to eat a good portion of your food raw.

Sugar is highly addictive, and if you’re like most people, you’re no stranger to carb cravings. Just know that once your body gets used to burning fat instead of sugar as its primary fuel, those cravings will vanish. Many cereals and other grain products would not be quite as harmful if they didn’t also contain so much added sugar. Even many organic brands contain excessive amounts. This is unfortunate, since many (Americans in particular) are really indoctrinated to eat cereal for breakfast. I’ve been working on a low-sugar cereal line for some time now, to provide a healthier alternative for those who really don’t want to give up their breakfast cereal. I hope to have it ready sometime this summer.

Also, remember that even if a high-fat, low-carb diet was to raise your total cholesterol and LDL, it doesn’t automatically mean that your diet is increasing your risk factors for heart disease. As O’Neill did in this film, you need to test your LDL particle number. Large-sized particles are good, while the smaller, denser particles can penetrate the lining of your arteries and stimulate the plaque formation associated with heart disease. The former does NOT increase your heart disease risk, while the latter one will. To learn more about LDL particle numbers and how to test them, please see my previous interview with Chris Kresser, L.Ac., which goes into this in some detail.