Bone Broth—One of Your Most Healing Diet Staples

Gastrocure Diet Bone Broth—One of Your Most Healing Diet Staples 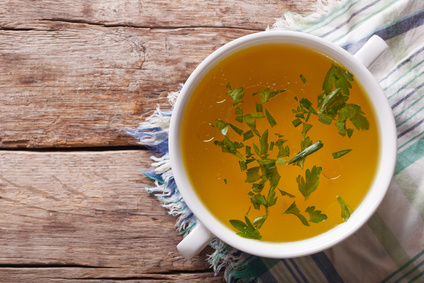 According to an old South American proverb, “good broth will resurrect the dead.” While that’s undoubtedly an exaggeration, it speaks to the value placed on this wholesome food, going back through the annals of time.

The featured article by Dr. Amy Myers lists 10 health benefits of bone broth. Sally Fallon with the Weston A. Price Foundation has previously published information about this healing food as well.

First and foremost, homemade bone broth is excellent for speeding healing and recuperation from illness. You’ve undoubtedly heard the old adage that chicken soup will help cure a cold, and there’s scientific support for such a statement.

For starters, chicken contains a natural amino acid called cysteine, which can thin the mucus in your lungs and make it less sticky so you can expel it more easily. Processed, canned soups will not work as well as the homemade version made from slow-cooked bone broth.

For best results, you really need to make up a fresh batch yourself (or ask a friend or family member to do so). If combating a cold, make the soup hot and spicy with plenty of pepper. The spices will trigger a sudden release of watery fluids in your mouth, throat, and lungs, which will help thin down the respiratory mucus so it’s easier to expel.

But the benefits of broth don’t end there. As explained by Sally Fallon:

“Stock contains minerals in a form the body can absorb easily—not just calcium but also magnesium, phosphorus, silicon, sulfur and trace minerals. It contains the broken down material from cartilage and tendons–stuff like chondroitin sulphates and glucosamine, now sold as expensive supplements for arthritis and joint pain.”

The Healing Influence of Broth on Your Gut

In later years, medical scientists have discovered that your health is in large part dependent on the health of your intestinal tract. Many of our modern diseases appear to be rooted in an unbalanced mix of microorganisms in your digestive system, courtesy of an inappropriate and unbalanced diet that is too high in sugars and too low in healthful fats and beneficial bacteria.

Broth or “stock” plays an important role as it’s easily digestible, helps heal the lining of your gut, and contains valuable nutrients. Abnormalities in your immune system are a common outcome of GAPS, and such immune abnormalities can then allow for the development of virtually any degenerative disease…

The Healing Benefits of Bone Broth

As the featured article states, there are many reasons for incorporating good-old-fashioned bone broth into your diet. The following health benefits attest to its status as “good medicine.”

Making your own bone broth is extremely cost effective, as you can make use of left over carcass bones that would otherwise be thrown away. And while the thought of making your own broth may seem intimidating at first, it’s actually quite easy. It can also save you money by reducing your need for dietary supplements. As mentioned above, bone broth provides you with a variety of important nutrients—such as calcium, magnesium, chondroitin, glucosamine, and arginine—that you may otherwise be spending a good deal of money on in the form of supplements.

Both featured articles include a sample recipe for homemade chicken broth. The following recipe was provided by Sally Fallon, writing for the Weston A. Price Foundation. Her article also contains a recipe for beef and fish broth. (You could also use turkey, duck, or lamb, following the same basic directions.) For Dr. Myers’ chicken broth recipe, please see the original article “10 Benefits of Bone Broth + Gut-Healing Recipe.”

Perhaps the most important caveat when making broth, whether you’re using chicken or beef, is to make sure they’re from organically-raised, pastured or grass-fed animals. As noted by Fallon, chickens raised in confined animal feeding operations (CAFOs) tend to produce stock that doesn’t gel, and this gelatin has long been valued for its therapeutic properties. As explained by Fallon:

“Gelatin was universally acclaimed as a most nutritious foodstuff particularly by the French, who were seeking ways to feed their armies and vast numbers of homeless in Paris and other cities. Although gelatin is not a complete protein, containing only the amino acids arginine and glycine in large amounts, it acts as a protein sparer, helping the poor stretch a few morsels of meat into a complete meal.”

Besides that, CAFO animals are fed an unnatural diet that is not beneficial for their intestinal makeup, and they’re also given a variety of veterinary drugs and growth promoters. You don’t want any of these potentially harmful additives in your broth, so make sure to start off with an organically-raised product.

1 whole free-range chicken or 2 to 3 pounds of bony chicken parts, such as necks, backs, breastbones, and wings

Gizzards from one chicken (optional)

Please note the addition of vinegar. Not only are fats are ideally combined with acids like vinegar, but when it comes to making broth, the vinegar helps leech all those valuable minerals from the bones into the stockpot water, which is ultimately what you’ll be eating. The goal is to extract as many minerals as possible out of the bones into the broth water. Bragg’s raw apple cider vinegar is a good choice as it’s unfiltered and unpasteurized.

There are lots of different ways to make bone broth, and there really isn’t a wrong way. You can find different variations online. Here, I’ll offer some basic directions. If you’re starting out with a whole chicken, you’ll of course have plenty of meat as well, which can be added back into the broth later with extra herbs and spices to make a chicken soup. I also use it on my salad.

Fill up a large stockpot (or large crockpot) with pure, filtered water. (A crockpot is recommended for safety reasons if you have to leave home while it’s cooking.)
Add vinegar and all vegetables except parsley to the water.
Place the whole chicken or chicken carcass into the pot.
Bring to a boil, and remove any scum that rises to the top.
Reduce the heat to the lowest setting and let simmer.
If cooking a whole chicken, the meat should start separating from the bone after about 2 hours. Simply remove the chicken from the pot and separate the meat from the bones. Place the carcass back into the pot and continue simmering the bones for another 12-24 hours and follow with step 8 and 9.

If cooking bones only, simply let them simmer for about 24 hours.
Fallon suggests adding the fresh parsley about 10 minutes before finishing the stock, as this will add healthy mineral ions to your broth.
Remove remaining bones from the broth with a slotted spoon and strain the rest through a strainer to remove any bone fragments.
Bone Broth—A Medicinal ‘Soul Food’

Simmering bones over low heat for an entire day will create one of the most nutritious and healing foods there is. You can use this broth for soups, stews, or drink it straight. The broth can also be frozen for future use. Keep in mind that the “skin” that forms on the top is the best part. It contains valuable nutrients, such as sulfur, along with healthful fats, so just stir it back into the broth.

Bone broth used to be a dietary staple, as were fermented foods, and the elimination of these foods from our modern diet is largely to blame for our increasingly poor health, and the need for dietary supplements.

Both broth and fermented foods, such as fermented veggies, are simple and inexpensive to make at home, and both also allow you to make use of a wide variety of leftovers. When you add all the benefits together, it’s hard to imagine a food that will give you more bang for your buck.